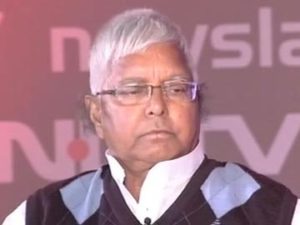 Reviewing the decision of the UPA government, the Centre has allowed RJD chief Lalu Prasad to retain his Tughlaq Road bungalow here till October while asking former Bihar Governor Buta Singh to vacate the Teen Murti Marg residence in Lutyen’s zone immediately. However, the family of late UPA minister Sis Ram Ola has been allowed to retain the Teen Murti Lane bungalow till February 2015, according to a senior official in Urban Development Ministry. Lalu, who has been staying at the Tughlaq Road bungalow since 2004, was served eviction notice after being convicted in a fodder scam and ceased to be an MP. Besides losing his Lok Sabha seat, Lalu’s RJD is no longer a national party. A national party chief can claim a suitable accommodation in the capital. After receiving eviction notice, Lalu had written to the then Urban Development Minister Kamal Nath requesting him for extension of his stay at the bungalow citing illness of his wife Rabri Devi which required regular visit to AIIMS here. Ahead of Lok Sabha polls, the UPA government had granted permission to the RJD chief to retain his Tughlaq Road bungalow for another year. The NDA government, which is facing a housing crisis and is yet to allot accommodation to all its ministers, reviewed the decision taken earlier by Nath. “It has been decided that Lalu has to vacate the bungalow by October this year,” the official said. The UD Ministry has also asked Buta Singh to vacate his Teen Murti Marg bungalow as soon as possible. “Buta Singh’s case has been referred to the eviction wing of Directorate of Estate and eviction procedure is being initiated,” said the official. The former Union minister has maintained that he has been staying in the bungalow due to security threats. Though 29 Cabinet ministers of the Narendra Modi government have been allotted houses, not many have been able to shift to their new accommodation because those bungalows are yet to be vacated by the previous occupants.