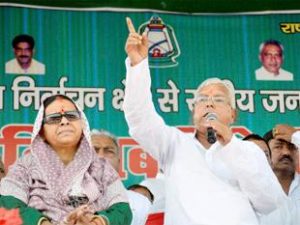 Patliputra / Saran: In his inimitable style, Lalu Prasad still sways folks in rural Bihar. At Sonmai village, a sizeable crowd has been waiting under a harsh sun for the last two hours to listen to him. Lalu tells them that he is an “ultimate phoenix” and the only man who can stop Modi from “capturing the gaddi in Delhi”.

This is his third rally on Friday in Patliputra, where Rashtriya Janata Dal has fielded his daughter Misa. In 2009 Lalu himself had contested here and lost. But this time, the former CM is doing everything he can to ensure his daughter and wife Rabri Devi — who contests from Saran — win, and he is helped by the split between BJP and Nitish Kumar’s JD(U).

ET spent the day with Lalu as he addressed as many as six rallies in Misa’s constituency — his schedule lists 18 rallies from April 9-12 in Patliputra and Saran.