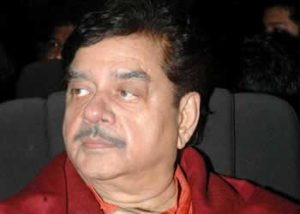 Patna: It was certainly a good news for ‘Shotgun’ Shatrughan Sinha who is busy campaigning for parliamentary election to Patna Sahib seat. The Bihari Babu will be honoured with the 15th IIFA (International Indian Film Academy) award on April 26 at the Raymond James Stadium, Tampa Bay (Florida), US, for his ‘outstanding contribution to Indian cinema’.

The 67-year-old with more than 200 Hindi films to his credit, including superhits like Kranti, Vishwanath, Kalicharan, Kala Pathar, Naseeb, Shaan and Dostana, has joined the league of Bollywood veterans Yash Chopra, Javed Akhtar, Ramesh Sippy and Asha Bhosle who were earlier honoured with the IIFA awards.

Reacting to the honour in the middle of his campaign in Bakhtiarpur area of the constituency on Sunday, Shatrughan said he was humbled. “I am thrilled to get this acclaimed award. It’s reward for my hard work,” he said, adding that he would dedicate it to the people of Patna.

“I had never thought of going this far in life. It’s by the grace of God and love and affection of my family and fellow citizens of Bihar,” said Shotgun, whose fate in the election will be decided on May 16 after Patna Sahib goes to the polls on April 17.

“After receiving IIFA award in the US I will come back to Patna to dedicate it to my fellow citizens”, he said.

It is like a ‘Lifetime Achievement award’ for Shatrughan, who had started his career in Bollywood in the role of a villain to reach the peak as a hero of many hit films.