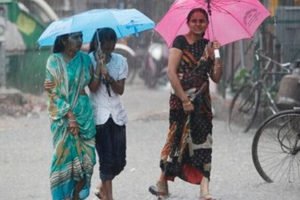 Heavy rains have been forecast at several places in the country in the next couple of days even as the overall rainfall remains deficient by 43 per cent so far.

The southwest monsoon has been vigorous over Bihar and Jharkhand and rains have also been forecast in Uttar Pradesh, Chhattisgarh, gangetic West Bengal, coastal Karnataka, Jharkhand and some Northeastern states.

According to an India Meteorological Department (IMD) bulletin issued this evening, heavy rains have been predicted for July 6 and 7 in all of these states along with Kerala and Goa.

As of this morning, rainfall in excess of three cm has been recorded in Bhagalpur, Gaya, Shimla, Patna, North Lakhimpur, Bareilly, Varanasi, Kalimpong, Coochbehar,  Burdwan, Berhampur, Cherrapunji, Sagar and Alibagh.

IMD had yesterday said the monsoon rainfall during June was below normal by 43 per cent.

Out of 36 meteorological sub-divisions, the rainfall has been deficient in over 20 and normal only in over 5, it said.

Private weather forecaster Skymet on the other hand predicted there is a possibility of the country facing drought this year, with the chances being as high as 80 per cent in north west India.

Attributing the El Nino effect to the weakening of monsoon, it predicted the rainfall to be at 91 per cent of the long period average.