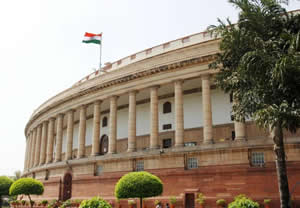 The Monsoon Session of Parliament beginning next month, expectedly on July 20, is going to be literally stormy, with the main Opposition Congress in no mood to cooperate with the government even on the GST and land bills.

The Janata Parivar and the Left are also likely to become aggressive inside Parliament because of the upcoming Bihar Assembly polls, which the BJP-led front will fight under the leadership of Prime Minister Narendra Modi.

The government can manage the AIADMK, BJD and the Trinamul Congress on certain bills but cannot take their support for granted.

For example, the AIADMK has been opposing the GST bill while the Trinamul Congress cannot be seen in favour of the land bill. A package for West Bengal may make the Mamata Banerjee-led party passive but it cannot be friendly with the BJP, whose leaders are raising the Ram Mandir issue in Ayodhya to polarise people on communal lines. West Bengal and Tamil Nadu will be going to the polls next year.

The Opposition leaders in the Rajya Sabha are angry with top ministers and floor managers for undermining the Upper House simply because of their failure to manage numbers.

The BJP allies are unhappy for either not getting good portfolios or are being ignored as was seen in the first anniversary celebrations of the Modi government.

The Shiv Sena’s “blow hot blow cold” strategy, the Shiromani Akali Dal facing anti-incumbency in the coming Punjab polls, the PDP’s reluctance to join the NDA at the national level and the TDP’s war with the TRS in Hyderabad are not good indications for government managers.

The Trinamul Congress, Samajwadi Party, RJD and the NCP might not be with the Congress, Left and JD(U) in demanding Union minister Sushma Swaraj’s resignation for helping former IPL chief Lalit Modi but they cannot be friendly with the BJP and the Modi government. The Maharashtra government has made the Sharad Pawar-led NCP its main target and is filing FIRs against its leaders.

“Our mandate is to oppose the government and we will oppose them on the floor (of the House),” a Congress strategist said.

“Earlier, we were in favour of GST and other bills. But if the BJP played an obstructionist role when in they were in the Opposition, why should we be constructive and cooperative with the Modi government?” he asked.

It is unclear whether Congress chief Sonia Gandhi will be calling a meeting of leaders of like-minded parties for floor coordination in Parliament before the commencement of the session. Meanwhile, the PAC of Cabinet will be meeting next week to finalise the schedule for the Parliament session.