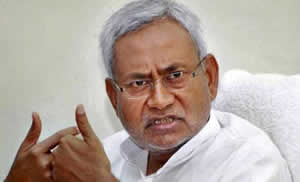 Chief Minister Nitish Kumar today brushed aside allegations of BJP and other parties over timing of ‘Badh Chala Bihar’ being carried out to take direct feedback from the people for preparation of vision document on development of Bihar till 2025.

He said it was the most appropriate moment to launch the exercise as people were more willing to express their views during the elections.

Mr Kumar told media persons here that his government had launched ‘Badh Chala Bihar’ exercise to take feedback from a large number of people which would be used as inputs for preparation of vision document on development for Bihar till 2015.

“This was a massive exercise ever carried out in any part of the world for preparation of vision document,” he added.

“All allegations about timing of the launching of the exercise are baseless as it was most appropriate moment for carrying out the exercise,” the Chief Minister said, adding that the event had nothing to do with the Bihar assembly elections.

Mr Kumar said the document thus prepared would be of people of Bihar and the state government, not of any particular party.

“What was wrong in such mega exercise, being carried out by the government,” hequestioned.

The Chief Minister said that people were willing to express their views during elections and the exercise would have the advantage in this sense.

Vision document would guide the government in launching schemes to accelerate the pace of development in Bihar, he noted.