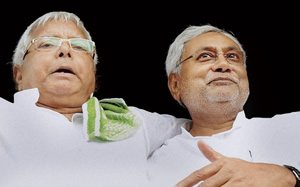 Nitish said “it is the BJP’s culture to defend its people. The person just needs to be from the BJP.”

Bihar allies Nitish Kumar and Lalu Prasad separately attacked the BJP government but only CM Nitish chose to take it on over Sushma Swaraj’s help to Lalit Modi, with Lalu saying Sushma should not be targeted. Nitish said the BJP “hides its wrongdoing very well”. At a press conference in Patna, he said, “It is the BJP’s culture to defend its people. The person just needs to be from the BJP.”

Lalu, on the other hand, was quoted by PTI as urging parties to let up on its attack on Sushma. “Sushma is a woman. She should not be pestered over the issue.”

Lalu preferred to target another Modi, BJP legislature party leader Sushil, who had recently said “jungle raj” was back in Bihar. “Sushil Modi has been attacking a particular community by attaching ‘jungle raj’ to our rule. The BJP is like ringworm of the country and its ghar wapsi is certain,” he said.

Nitish mocked the government’s Yoga Day plans. “Yoga is a matter of private faith. There is no need to advertise yoga.” He described Baba Ramdev, one of the faces of the Yoga Day events, as more of a “management guru” than a yoga guru.