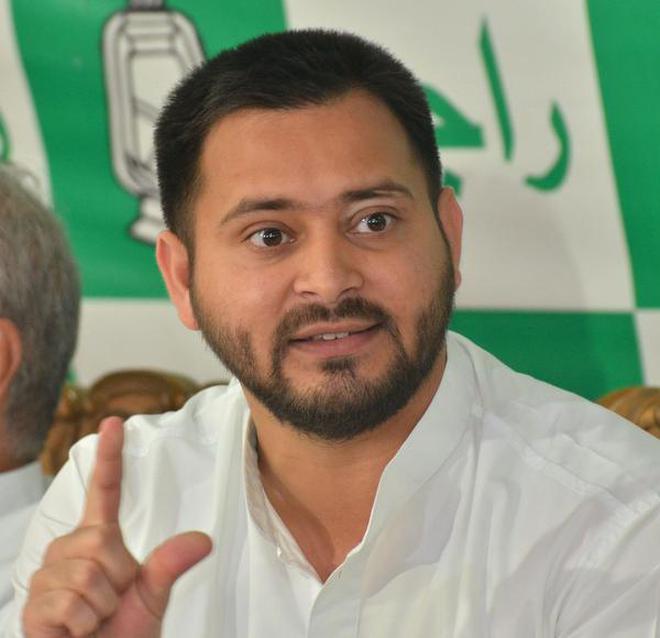 New Delhi: On completion of JDU-BJP’s first year in power in Bihar, former Dy. CM Tejashwi Yadav came heavily down upon the alliance partners for ‘betraying’ the state of Bihar. Tejashwi charged the two parties forged a coalition through a postern (chor darwaza) by going against the mandate received.

In an interview with ABP News’ Chitra Tripathi, he said the current Bihar government is an abject failure as the entire system is crumbling. “The administration has collapsed. Be it law and order, education, crimes against women.”

Calling Nitish a ‘coward’, he said, “Nitish Kumar feared political vendetta. Perhaps, that could be a reason for joining hands with BJP. He is coward. Also, greed of holding on to the CM seat was another factor to break ties with RJD.”

Tejashwi said people in the state are aggrieved with the current government since the crime graph has proliferated. “Never in Bihar has crime risen so rapidly.”

Speaking on the infamous Srijan scam, Tejashwi said the names of Nitish and Sushil Kumar Modi had emerged in the investigation. “There’s an upsurge of impunity. Look at also the case of Union Minister Ashwani Choubey’s son.”

“Brajesh Thakur is still not named in Fir. He’s not been taken under police remand. We want a High Court monitored probe in the rape of girls in government-run ‘Balika Grih’,” he added,

Commenting on why he is pouring scorn on Nitish now when RJD had itself formed government with JDU, Tejashwi explained, “Things were in control during our alliance with Nitishji. In those 18 months we tried to fulfil a lot of commitments. The ease of doing business in the state became No. 1, GDP was No. 1. The crime graph was declining. But now Nitishji has lost all credibility.”

Extending his caustic remarks against Nitish, the 28-year-old said, “His (Nitish) own party men are disappointed with him, They do not want him to continue as chief minister.” On allegations of trying to rupture JDU, he said, “I once said in an open forum that Upendra Kushwaha (RSLP chief & MoS) can be a part of our struggle since our ideologies are similar.”

He further alleged a case is filed against anyone who tries to fight against the BJP. “The BJP has unleashed political vendetta against opposition parties.”

Tejashwi has blamed Nitish Kumar for conniving with the BJP to send his father Lalu Prasad in jail “we will knock the doors of the higher courts. The battle has not ended yet.”

When asked whether he sees Rahul Gandhi has the PM candidate of the Opposition parties for 2019 polls, Tejashwi said, “It is a big responsibility on Rahul Gandhi to bring all parties together. I believe a pre-poll alliance should be formed.” A few days ago he had said Rahul wasn’t the sole opposition candidate for the top post.

Ramping up his attack against RSS (Rashtriya Swayamsevak Sangh), Tejashwi said BJP is trying to deploy people from the RSS in major universities as vice-chancellors. “If Modi comes again in 2019 then our constitution will be under grave danger. They will destroy our rich heritage and in the education curriculum Modi will be projected as a godly figure.”