Bihar Chief Minister Nitish Kumar skipped the International Yoga Day celebrations for the fourth consecutive year, this time despite being part of the NDA.

Prior to this, the Bihar government did not celebrate this day as the Janata Dal (United) was part of the mahagathbandhan, however, this year it was expected that after the party joined the BJP-led NDA, the state government would be celebrating this day along with the BJP but that did not happen.

The main event on the occasion of International Yoga Day was organised at the Patliputra Sports Complex. It was inaugurated by Governor Satyapal Malik and Union Minister Ravi Shankar Prasad and Pataliputra MP Ram Kripal Yadav. Deputy chief minister Sushil Kumar Modi and three other ministers from the BJP quota were also in attendance. 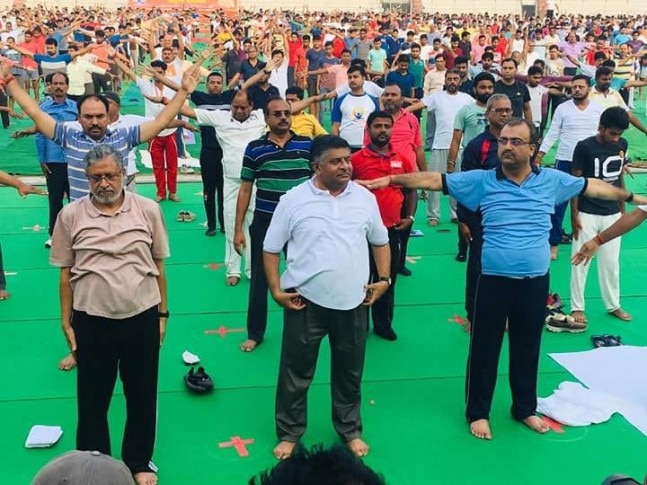 India Today spoke to Union Minister Ravi Shankar Prasad over the non-participation of the Bihar chief minister who defended him maintaining that Nitish was a yoga enthusiast and the issues should not be politicized.

“Nitish Kumar is a yoga enthusiast and yoga is a medium to connect. Media should find out what is the politics behind Nitish Kumar’s absence”, he said.

Deputy chief minister Sushil Kumar Modi also came to the defence of Nitish Kumar maintaining that several BJP quota ministers were also not present at the event but it did not mean that they were against yoga.

“I know that Nitish does yoga every day. It is not that all the BJP quota ministers were present at today’s celebration but that does not mean that they are against yoga”, said deputy chief minister Sushil Modi.

It is not a question about JDU. I know more than dozen people present here who are from JDU. Don’t people from RJD & JDU practice Yoga? It is not necessary that everyone comes out to participate: Bihar Dy CM Sushil Modi on reports of JDU not participating in Yoga day celebration pic.twitter.com/QSqYIQugqr

Modi also took a dig at RJD supremo Lalu Prasad Yadav and said that Nitish performed yoga every day but those who did not do it have to undergo treatment at Mumbai hospital.

It may be noted that after being convicted and sentenced to a twenty-seven years jail term Lalu Prasad Yadav is out on bail on medical grounds and is undergoing treatment at the Asian Heart Institute in Mumbai presently.