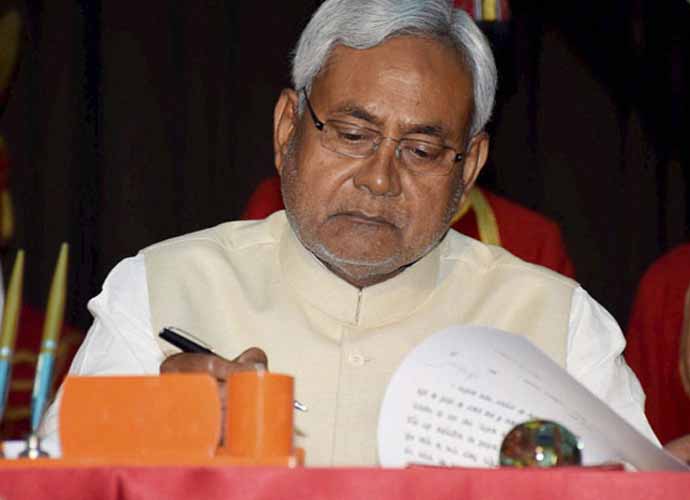 In a veiled reference to Tejashwi Yadav, son of jailed RJD supremo Lalu Prasad Yadav, Bihar Chief Minister Nitish Kumar on Thursday told a gathering that there are “some who just love to tweet but have no understanding”. Kumar was apparently referring to the Leader of Opposition’s tweets in which he never misses chance to criticise the state government.

Without naming Tejashwi, Kumar said that “they love to keep tweeting all through the day but have no understanding of any issue.” This is not the first time when the CM has taken a swipe at Tejashwi’s understanding of the state’s issues. Recently, in the Vidhan Sabha, Kumar had referred him as a ‘babu’ (kid) and advised him to “try to understand the problem”.

Kumar also flayed Tejashwi for changing his stand on prohibition law. He said that after the prohibition law was introduced, he (Tejashwi) used to say votes have increased. “Now he is criticising,” the CM said while addressing a gathering in Patna to mark two years of the prohibition law. The CM further advised Tejashwi to help the police in arresting people who are involved in illegal trade of liquor and termed his criticism that only the poor were getting arrested as ‘nonsense’.

Nitish Kumar is known for his quiet behaviour. He had joined the micro-blogging site in May 2010 but remained cut off from the platform. However, he started using his twitter account widely during 2015 assembly polls when he joined the ranks with the RJD and Congress to take on the BJP. He was seen engaging with rival-turned-friend Prime Minister Narendra Modi on many occasions. However, after he moved out of the Grand Alliance last year, Nitish stopped targeting the PM and BJP in his tweets.

As of today, he has over 44 lakh followers and his posts are very generic in nature. He mostly tweets photos of his official engagements. People close to Kumar say that the CM is very busy and thus finds little time for such platforms. Also, he believes that conventional campaigns yield better results for him, they said.

On the contrary, Tejashwi and his father Lalu had joined Twitter much later than Nitish. While Lalu had joined the platform in August 2012, Tejashwi had made a debut in December 2013. Lalu has a follower base of 43 lakh and close to 11 lakh people follow his son. The two are often seen taking harsh jibes about Nitish’s decision to dissolve the Grand Alliance and join ranks again with the BJP to remain in power.