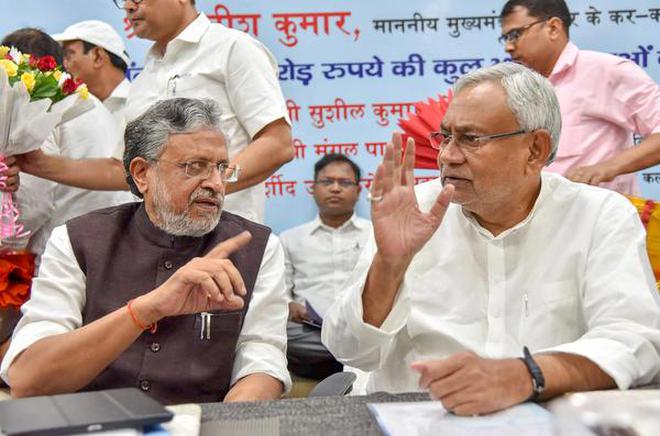 Seat adjustment talks are yet to start in both the ruling and Opposition camps in Bihar but political turbulence appears clearly indicated following conflicting signals from Chief Minister Nitish Kumar.

BJP president Amit Shah, mindful of the same, will be in the State on July 12 for a customary meeting of the party organisation. But, sources said, he would also meet with Mr. Kumar and Minister of State for Human Resource Development Upendra Kushwaha, who also heads the Rashtriya Lok Samata Party (RLSP).

Mr. Kumar created a flutter with a strongly worded speech on communal violence two days ago and his close aide, Sanjay Singh, made a tough statement on seat adjustment in the State for 2019, saying: “If the BJP does not want an ally in Bihar it can field its candidates in all the 40 Lok Sabha seats.”

The Janata Dal (United), in its earlier stint in the National Democratic Alliance (NDA), fought 15 Lok Sabha seats, while the BJP contested in 25 constituencies. In 2014, after Mr. Kumar walked out of the NDA, the BJP won 22 seats out of the 30 it contested, Ram Vilas Paswan’s Lok Jan Shakti Party (LJP) bagged six out of seven and the RLSP all the three seats it contested.

It is a tight squeeze and Mr. Kumar’s conflicting statements are being seen as a jockeying for a better bargain on seats. On Wednesday, however, another close aide of Mr. Kumar, Rajya Sabha member R.C.P. Singh said, “There are no differences in the NDA in Bihar and it is strongly united…whenever the alliance partners sit together, seat adjustment will be done.”

He also termed Mr. Sanjay Singh’s remarks as his personal view, and the Congress a “sinking ship.”

Contradictory posturing evident in Congress too

This contradictory posturing was evident in the Congress ranks as well, with State leaders, including Pradesh Congress Committee chief Kaukab Quadri, holding meetings on the Janata Dal (U) joining the ”Mahagathbandhan” again, while the Central leadership denying any such move.

Congress leader Shaktisinh Gohil, who recently took over as Bihar in charge, toldThe Hindu, “At present, Nitish Kumar is with the BJP, a fascist party! We don’t want to comment on what he will do or not do.”

He also denied reports that the JD(U) has opened a line of communication with the Congress to return to the ”Mahagathbandhan” which he abruptly left last July.

According to sources, Mr. Yadav, aware of Mr. Kumar’s rising discomfiture in the NDA, sought reassurance from Mr. Gandhi that the RJD’s place in the alliance would not be diminished even if Mr. Kumar decides to return.

“We cannot talk about details of one-on-one meetings that senior leaders have. All that I can say is that we have not started talks on seat-sharing and they will begin shortly,” Mr. Gohil said.