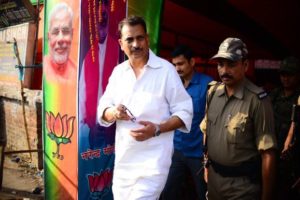 It’s rare that a reporter is flying to a constituency to report on an election and the flight happens to be piloted by a candidate for the same seat. It happened with me.

Last weekend, I boarded an afternoon flight from Delhi that would take me to Patna, capital of Bihar. As the passengers settled down, the flight crew climbed on board. Among them was a tall man in a pilot’s uniform and a pair of aviators.

A middle-aged couple sitting next to me looked awestruck. The woman chuckled and told her husband: “Had this man been in formals and not in a uniform, he would have looked exactly like Rajiv Pratap Rudy.”

After a matter of 10 minutes, the woman—and the rest of us—discovered from the flight’s PA system that the chief pilot on board was, indeed, Rudy, a Bharatiya Janata Party (BJP) leader and a contender against Rabri Devi, former Bihar chief minister and wife of Rashtriya Janata Dal (RJD) chief Lalu Prasad.

Through the flight, Rudy kept us engaged with detailed descriptions about the distance covered, the cities crossed and the temperatures inside and outside the plane.

Once the flight landed in Patna, many passengers were eager to meet him and the politician from Bihar obliged them all.

We met him on Wednesday on his campaign trail in Chhapra, a small town in Bihar’s Saran Lok Sabha constituency and asked him if flying between the campaigning period did not cause any problems. Rudy said it was a “great stress buster” during the hectic election schedule.

“I don’t travel as a passenger; wherever I go, I am part of the crew,” Rudy said at his makeshift campaign office in Chhapra.