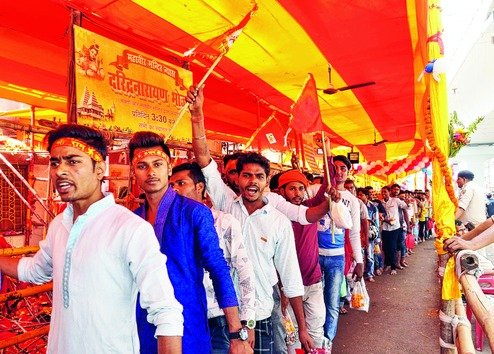 Patna: The recent spate of violent clashes in the state has had a cascading effect on the Bihar bureaucracy, which feared escalation in such incidents in the days to come.

As a result, many of the officers posted as district magistrates, superintendents of police and divisional commissioners want to be removed from their field postings.

In an informal chat with The Telegraph, over a dozen IAS and IPS officers said – strictly on the condition of anonymity – that they have vouched for their transfers and even sought the assistance of their bosses.

“I am fed up with the disturbances in the districts falling under my jurisdiction in the past one week and want to be transferred,” said one such senior IPS officer.

Over half-a-dozen districts have witnessed a communal flare-up in the past one week, especially after Ram Navami. “The disconcerting trend has made the officers posted in the districts nervous. Even after a week, processions are being taken out making the task of the law enforcing agencies tough,” said another IPS officer.

In Gaya’s Imamganj and Tekari blocks, processions were taken out on Saturday on the occasion of Mahavir Jayanti. “The officers of Nawada district were so apprehensive that they sought central paramilitary forces to be deployed in the region by Saturday morning after a shop was set on fire by an unruly mob last night,” another police officer revealed.

An SP of a district in central Bihar, which witnessed large-scale violence last week, went a step further. “I don’t want to remain in the field. I have already spoken to my senior to get me transferred from here. The task has increased manifold and nobody is ready even to listen to the problem. Everybody only talks about results,” he said.

The frustration among the officers was evident. “There is a limit of endurance. Now we have crossed that limit. What to talk of DMs and SPs, even no officer wants to be posted as a thanedar (station house officer of a police station) in the present circumstances,” said an IAS officer posted as DM in north Bihar.

The gravity of the situation could be gauged from the fact that the state government had to depute a DG-rank IPS officer in Aurangabad to bring the situation under control.

Not only commissioners, but IGs and DIGs are also on their toes. An ADG rank officer received a call from another IPS officer at 1.30am who requested the former to send one company of central force to be deployed in a trouble-torn district.

An IAS officer was so irritated that he called a senior politician of the ruling alliance to get himself removed from field posting. “Kindly do something for me, sir. It is unbearable now. The stress will affect my health too,” an IPS officer quoted a DM as saying.