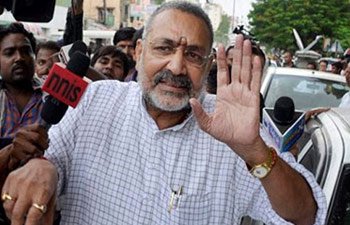 “By seeing Giriraj Singh one can easily judge the character of the PM’s cabinet. Giriraj also proves the agenda of the NDA government. Giriraj’s statements, like Araria becoming a safe heaven for terrorists after the RJD’s bypoll victory, prove that he has been made minister for such statements,” Tiwari said.

Tiwari pointed out that a case was registered against Giriraj during the 2014 Lok Sabha elections for saying that those opposing Modi are pro-Pakistan.

“The people of Bihar still do not know which ministry he looks after and what decision he has taken benefiting Bihar. The only news I read about him is statements related to disturbing communal harmony,” Tiwari said about the Union minister of state for micro, small and medium enterprises.

The senior RJD leader questioned chief minister Nitish Kumar’s “silence” over the comments of Giriraj and state BJP president Nityanand Rai. During the Araria Lok Sabha bypoll, an FIR was registered against Rai for allegedly saying that if the RJD candidate, Sarfaraz Alam, won the region would become an ISIS den. After Alam won, Giriraj said that Araria would become a safe haven for terrorists.

“Why does Nitish Kumar not speak out when the leaders of his alliance give such provocative speeches?” Tiwari asked. “The BJP leaders are making such controversial statements because Nitish tying up with them has lifted their morale. After surrendering to the BJP, Nitish’s authority has gone, his moral strength is finished and he has no credibility left. Earlier, Nitish went to the BJP on his agenda; today, he has no option except going with the agenda of the BJP which is divide and rule, fascism, and disturbing communal harmony.”

Nitish and Tiwari on Sunday shared the dais when they paid tributes to the late Ramanand Tiwari, Shivanand’s father and Bihar’s first home minister, on his birthday.