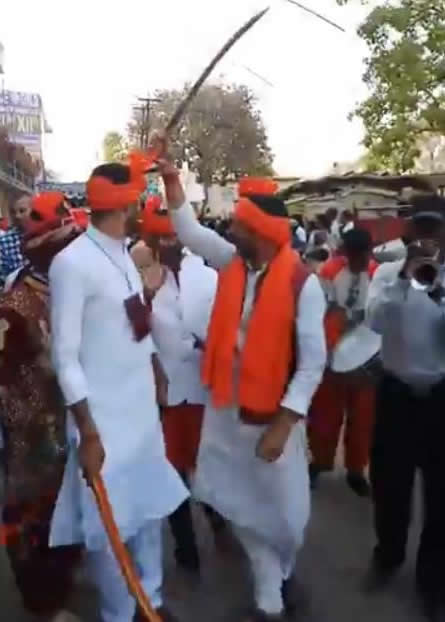 Union Minister Ashwini Chaube’s son Arjit Shashwat on Sunday made a mockery of Bihar Chief Minister Nitish Kumar and his police administration after he led an armed procession despite an arrest warrant issued against him.

Shashwat was seen attending Ram Navami processions and brandishing weapons as his supporters chanted anti Muslim slogans such as ‘you have to chant Vande Matram if you want to stay in India.’ Such was his disdain that he even posted the entire video of his procession on his personal Facebook page.

Ironically, the day the union minister’s son was brandishing weapons and indulging in anti-Muslim sloganeering, Bhagalpur Senior Superintendent of Police Manoj Kumar was assuring media personnel that the cops had received the copy of the court’s order and all the accused would be arrested soon.

Meanwhile, Chaube disdainfully said that there was no question of his son surrendering before the police adding that Shashwat was not hiding and had taken part in Ram Navami celebrations in his native village. Shashwat was named in the FIR for taking out a procession without prior permission from the administration in Bhagalpur on 17 March. The procession had triggered communal clashes in the area leaving many people including two policemen injured.