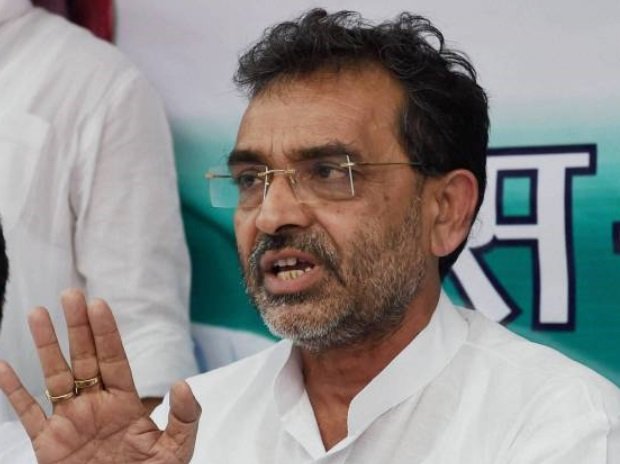 The silence within the ruling National Democratic Alliance in Bihar and at the centre, after the attack on Union Minister Upendra Kushwaha near Hajipur in Bihar on Tuesday, April 10, is most intriguing. This, at least, is what the rank and file of Kushwaha’s Rashtriya Lok Samata Party—which is part of the NDA—feel.

Though the Union Minister was on his way to attend Prime Minister Narendra Modi’s programme at Motihari in East Champaran, yet no one––from Bihar chief minister Nitish Kumar to the PM himself––chose to condemn the incident.

Yesterday, a ‘Bharat Bandh’ had been called by groups opposed to caste-based reservations. Kushwaha was stopped by the supporters of Aarakshan Virodhi Morcha at about 8.30 am. His car was detained near Hajipur and he was manhandled. According to party sources, the morcha supporters used abusive language against the minister and called him pro-reservationist. The drama continued for about half an hour, yet there was no police around the scene, his party alleged.

The attack on Kushwaha raised several questions. He was not the only minister to travel to Motihari from Patna. Then, why was no other minister or NDA leader stopped by bandh supporters?

The bigger question is: why is it that no one chose to speak on the issue in Motihari three to four hours later? The Prime Minister himself started speaking at 12.40 pm. He was preceded by Chief Minister Nitish Kumar, Union ministers Ram Vilas Paswan, Radha Mohan Singh and Uma Bharati, Deputy Chief Minister Sushil Kumar Modi and several others.

No one even referred to why Kushwaha had to return from Vaishali without attending the PM’s programme to mark the completion of 100th year of Mahatama Gandhi’s Champaran Satyagraha.

Modi’s BJP, Paswan’s LJP and Nitish’s JD(U) remained tight-lipped, even after top RLSP leaders issued a press statement condemning the attack on Kushwaha. They questioned the law and order situation in Bihar and said their leader was attacked by believers of “feudalism” and “Manuvad”.

If a Union minister can be held hostage for so long on the day of a bandh, which the state administration was aware of well in advance, what would have been the situation for common people, asked an RLSP leader, who sees a great conspiracy behind the attack.

RLSP, it needs to be mentioned, is not happy with its alliance partners BJP and JD(U). A few days after Chief Minister Nitish Kumar organised a human chain in support of a ban on dowry and child marriage, Kushwaha organised another human chain in Bihar on the sorry state of education. The other NDA leaders were upset over this action. They did not attend Kushwaha’s human chain event, which saw participation by leaders from Lalu Prasad Yadav’s Rashtriya Janata Dal, the main Opposition party in Bihar.

Sometime back Kushwaha even went on to meet Lalu in jail, and more recently visited Lalu in his hospital room in AIIMS, Delhi. This was an open challenge to Nitish and Sushil Modi, who leave no stone unturned to attack the RJD supremo.

Kushwaha is known for his anti-upper caste stand and always stood for reservation. That is why he was singled out for attack by anti reservationists on Tuesday.

Now, the RLSP has started a campaign for reservation in judiciary and media.

According to the party general secretary Fazal Imam Mallick, an all-India movement is going to be launched from May 20. He said that his party always stood for the empowerment of backward castes and Dalits. This is not possible without representation in judiciary and media.

RLSP leaders are in private asking how can the prime minister forget to mention the name of his cabinet colleague from Bihar who could not attend the function.

After all, when Lalu Prasad met with a minor accident during the election campaign for 2014 Lok Sabha polls, none else but Narendra Modi rang up to inquire about his welfare. But why no such public gesture was made for Kushwaha when he is an honourable minister in Modi’s cabinet?