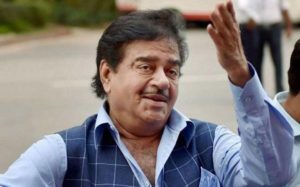 PATNA: BJP MP Shatrughan Sinha, who would till recently call Nitish Kumar “a dear friend and guardian of Bihar”, on Saturday rubbished the CM’s oft-repeated demand for special category state status to Bihar.

In a series of tweets, the cine star-turned-neta said the demand for special state status was “crocodile tears” ahead of the general election next year. He also cautioned the Nitish-led NDA government in the state to “start performing” or Bihar legislative assembly’s leader of opposition Tejashwi Prasad Yadav was waiting like the mythological Ärjun to take over.

“With the general election knocking at our doors, the crocodile tears are back… and the ‘drama’ starts unfolding once again. The ‘ruling coalition’ in Bihar (NDA) is demanding special status for Bihar, yet again… that too from their own NDA government at the Centre… and publicly!” tweeted the former Union health minister.

Nitish on May 29 released a note, demanding afrresh special status for Bihar from the 15th Finance Commission. It has been supported by deputy CM and senior BJP functionary Sushil Kumar Modi and Union minister and LJP president Ram Vilas Paswan.

Making a scathing attack on Nitish, Sinha also tweeted, “Isn’t it just propaganda for votes? Stooping down to rock bottom level out of an insatiable greed and desire to stay in power. Sadly, performance has given way to only propaganda. Endeavour for growth and development has been replaced by trifling, truancy, sluggishness and lip service.”

He further said, “My dear friends of NDA coalition, start performing and executing for Bihar or else there are ‘Arjuns waiting to take over’ as Tejashwi Yadav’s challenge echoes in all corners of Bihar.”

Sinha, , who represents Patna Sahib in the Lok Sabha, has left his party red-faced on several occasions in the past as well. He met West Bengal CM and Trinamool Congress chief Mamata Banerjee in Delhi and also jailed RJD chief Lalu Prasad in Ranchi a couple of months ago. Lalu has been sentenced to jail term fodder scam cases. Sinha also met Lalu’s family in Patna after his conviction.

Not surprisingly, state political circles are abuzz with speculations on the future course of action of Sinha who has been a bitter critic of his party leadership as well as Narendra Modi government’s policies, including demonetization and GST.