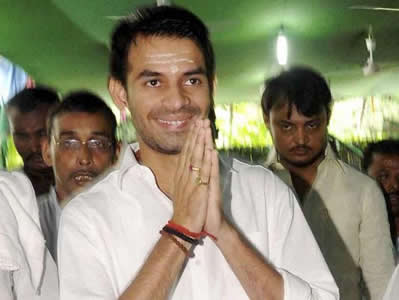 Rashtriya Janta Dal (RJD) Chief Lalu Prasad Yadav’s elder son Tej Pratap Yadav is set to tie the knot next month with Aishwarya Rai, the granddaughter of ex-Bihar CM Daroga Rai and daughter of senior RJD leader and MLA Chandrika Rai. “The tentative date for the marriage is 12 May, and the ring ceremony is expected to take place on 18 April,” a close family aide said on the condition of anonymity.

The venue for the marriage is Patna’s Veterinary College grounds, the same place opted by Deputy Chief Minister Sushil Modi for his son’s marriage after threats from Tej Pratap Yadav. Aishwarya who has done her schooling Patna’s Notre Dame school, is a history graduate from Delhi University. She also have an MBA from Amity University in Noida.

“Despite receiving many job offers, including one from the World Bank, she has not worked anywhere,” one of her relatives said. She is the eldest of her three siblings. Her younger brother Apurva has been pursuing law degree and sister Aayushi is an engineer.

Speculations about the impending marriages of Lalu’s two sons, Tej Pratap and Tejashwi Prasad Yadav, have been rife for a while now. In a recent interview, Tejashwi said he would tie the knot only after his elder brother and two other political leaders – Lok Janshakti Party chief Ram Vilas Paswan’s son Chirag Paswan and chief minister Nitish Kumar’s son Nishant Kumar – took the marital plunge.

Tej Pratap’s marriage will be the first big wedding in Lalu’s family since 2014, when the RJD chief’s youngest daughter Raj Laxmi tied the knot with the grand-nephew of Samajwadi Party patriarch Mulayam Singh Yadav. Prasad’s daughters Ragini, Hema and Anushka are also married into political families across Delhi and Haryana.

Only recently, Rabri Devi had controversially remarked that she did not want a “mall-going” daughter-in-law for her sons. Rabri had told reporters that they want daughters-in-law who “will respect them, abstain from trips to the mall, and run the house smoothly”. This had triggered a controversy but Lalu was quick to do damage control. He had tweeted saying, “Sanskari bahu doesn’t mean veiled, homebound, dependent lady. It means strong-willed, loving, caring lady, whthr (whether) working women or housewife (sic).”

Tej Pratap’s impending marriage has often been a point of a political war of words in Bihar. During a public rally in Motihari in Bihar in December 2017, Tej Pratap had taken a dig at Chief Minister Nitish Kumar saying he doesn’t want a “dhokhebaaz dulhaniya” like the JDU leader.

Interestingly, Bihar BJP chief, Sushil Modi, whose son’s wedding had been boycotted by Tej Pratap Yadav, may just have helped Rabri in finding Tej Pratap a suitable match. Afterall, it was Tej Pratap himself who had requested “Modi uncle” to find a bride for him as well. The deputy chief minister tweeted back that he was ready if Tej Pratap met three conditions of “No dowry, pledge organ donation and no threatening to disrupt any marriage.” But Tej Pratap’s mother, Rabri Devi, had her own conditions.

According to another RJD leader, talks between the two families had been underway for the last six months. “The girl is intelligent and we do not rule out the possibility of her joining politics sooner or later. Both the families are very happy with the relations” he said. However, the bride’s parents have said that an official announcement is yet to be made and Lalu’s family will be the one making the announcement.

When asked about the news, Leader of Opposition and Tej Pratap’s brother Tejashwi Yadav said: “Such information should be given by parents and guardians. Anyway, people would get to know once invitation cards are printed.” He added that his turn would come after his elder brother gets married.

Meanwhile, there was no confirmation if the incarcerated RJD chief, who is currently being treated at AIIMS hospital in Delhi, will be able to attend the wedding. Lalu’s aide said they are likely to a move a petition to this effect in court. “We will try to keep the function as simple and modest as possible as we are pained at our leader being in jail,” an RJD leader was quoted as saying.