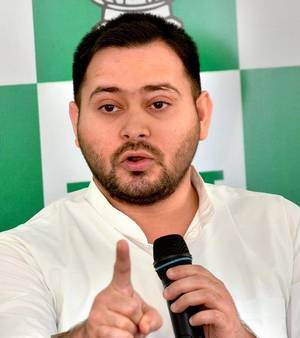 Rashtriya Janata Dal (RJD) leader Tejashwi Yadav has appealed to the people of the state to remain on high alert against the Bharatiya Janata Party (BJP)’s evil design of inciting communal tension in Bihar.

Tejashwi raised apprehensions of communal riots in the state in the backdrop of the recent Bhagalpur communal tension and riots in Aurangabad during Ram Navami celebrations.

“My humble request to the peace loving people of Bihar that they should maintain peace and harmony in the state. People should remain on alert against BJP’s rioters and goons and there venomous design”, Tejashwi tweeted.

Appealing to the backward and the deprived section of the society, Tejaswi Yadav warned the Dalits, backward classes and minority sections of the society to remain vigilant against the feudal forces in the country.

I appeal people of Bihar to maintain peace and harmony & not to fall in the trap of BJP led Nitish govt. I hv asked our party cadre & MLAs to help administration in maintaining law & order.

“BJP wants to divide backward and Dalit-Hindus into Hindu-Muslim and remain in power. People must be careful against such evil designs”, the RJD leader said.

It may be mentioned that Tejashwi’s appeal for calm has come in the backdrop of the Aurangabad riots that erupted on the day of Ram Navami. At least 50 shops were torched and several people were injured in the communal violence that broke out on Sunday.

50 shops torched by rioters and more than 60 persons injured in stone pelting.

Nitish Kumar must be relaxed & enlightened after bringing BJP in power from back door.

Tejashwi Yadav also took a dig at Bihar CM Nitish Kumar in another tweet saying, “Nitish Kumar must be relaxed and enlightened after bringing BJP in power from back door.”