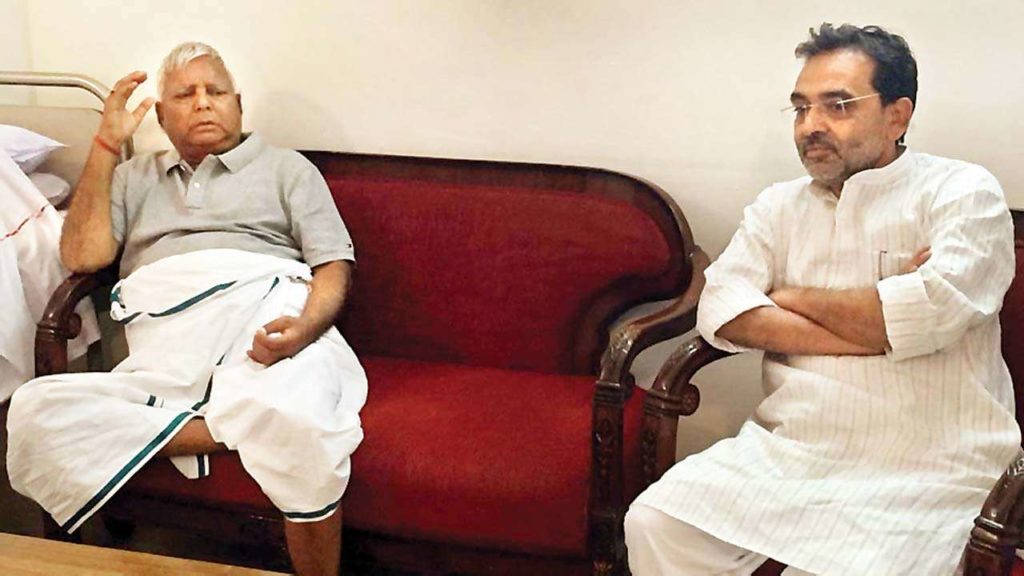 Earlier in January, Kushwaha, Lok Sabha MP from Karakat in Bihar, had shared the dais with senior RJD leaders when he had formed a human chain against the “deteriorating education sector” in Bihar. The move had triggered talks of Kushwaha quitting the NDA, as the alliance was in power in both the Centre and the state. That Kushwaha himself holds the post of junior Union HRD Minister and had formed the chain in an NDA-ruled state, was seen a strong message from his side to the alliance.

Sources said Kushwaha, whose party has three MPs in the Lok Sabha, is unhappy over being “ignored” by the senior alliance partners. “He is dissatisfied over his junior position where he does not have much work,” said an RLSP leader.

Also, Kushwaha is uncomfortable with Bihar CM Nitish Kumar returning to the NDA fold in July 2017. Kushwaha was once counted amongst the closest aides of Kumar but their relations soured and he ultimately floated a new party and allied with the BJP ahead of the 2014 Parliamentary polls.

On Thursday, the Union Minister called on the RJD chief at AIIMS-Delhi, where the latter is undergoing medical consultation, and shared a picture of it on Twitter. The BJP, however dismissed the meeting as a personal one. “He met Yadav in his personal capacity and political meaning should not be read in it. He will not like to push Bihar back into Jungle raj days,” said BJP MLA Nitin Navin.

Leader of the Opposition Tejashwi Prasad Yadav said it was a courtesy call but we don’t mind having Kushwaha in the Mahagatbandhan fold. “The purpose for which Kushwaha was in NDA has not been fulfilled. All are welcome on our side except uncle Nitish,” he said.

The RJD leaders though said that the party was working towards tapping as many “partners” as possible, for a united Opposition ahead of 2019. “Former CM Jitan Ram Manjhi has already switched over to our side and its impact was visible in the recently concluded by-election. With SP-BSP coming together in UP, we are hopeful of stopping the BJP’s juggernaut in 2019,” said an RJD MLA.

The RJD says it’s working towards tapping as many “partners” as possible, for a united Oppn ahead of 2019.
‘Ex-CM Jitan Ram Manjhi has already switched over and its impact was visible in recent bypolls,’ said an RJD MLA.
‘With SP-BSP coming together in UP, we are hopeful of stopping the BJP’s juggernaut in 2019,’ he said.