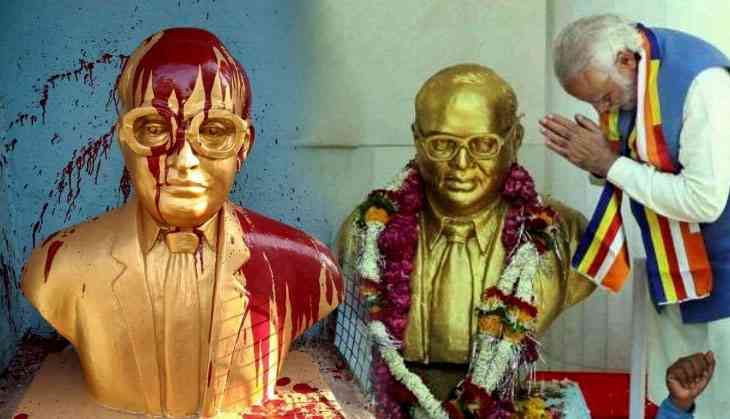 It is a surreal feeling to see all of the country’s top political leaders bow at the feet of the same statue whose replicas are being silently vandalised all over the country.

The BJP has gone out on a limb to celebrate the day and the reason is not hard to ascertain.

The Sangh Parivar has always abided by deeply casteist beliefs and yet the BJP managed to win a large share of Dalit votes, for the first time ever, in Lok Sabha elections in 2014.

However, four year later, Dalits across the country are angry like never before with the ruling party and its ideological affiliates. So much so that at least 5 of the BJP’s 40 Dalit MPs have come out openly to protest against the plight of Dalits under the BJP’s rule at the national level as well as in 21 states the party rules.

Attacks on Dalits and quotas for them have been bones of contention throughout the BJP-led NDA government’s tenure so far. The government’s alleged failure to promptly appeal for a review of Supreme Court’s recent order amending the Scheduled Castes and Tribes (Prevention of Atrocities) Act has become the latest flashpoint.

However, a sinister movement rapidly gaining ground mostly in north India is a testimony to the hypocrisy around the Ambedkar anniversary celebrations. In town after town and village after village, Ambedkar’s statues are being defaced, damaged and even demolished, by “unknown” forces.

This began much before the demolition of Lenin’s statue in Tripura by Sangh Parivar hooligans in March set off a series of attacks on statues of several Indian leaders across the country.

The attack on Ambedkar’s statues was sporadic initially but has picked up pace in past few weeks. In December 2016, a statue of Ambedkar was found desecrated in Dudwa Dharampuri locality in Sant Ravidas Nagar district in Uttar Pradesh.

Again in May 2017, another Ambedkar statues was desecrated under Thana Bhawan police station area in UP’s Shamli district. However, this year multiple such incidents have been reported from across the state and other states as well, including Bihar, Punjab, Haryana, Madhya Pradesh and even Tamil Nadu.

Just a day before Ambedkar’s birth anniversary, one of his statues was desecrated in Greater Noida in UP while a portrait of his was tampered with in Bihar’s Kaimur.

While local police and administration have been found to be prompt in repairing or replacing the damaged statues, what is interesting to note is that there is hardly any case in which the culprits have been found out.

Catch spoke to several officials in Shamli district to find out details of the attack on Ambedkar’s statue that took place about a year ago. The officials said on record that till date, no accused has been named.

In the absence of formal evidence, it is difficult to conclude who is behind this campaign, but what is not difficult to understand is who are the people for whom Ambedkar is a source of discomfort.

This was evident by the forces behind the violence during the anniversary celebrations of the battle of Bhima Koregaon as well as those who attacked Dalits during the 2 April Bharat Bandh.

The Dalit leader is no less than a God for Dalits, who revel in the light of his image. They swear by his name and his enunciation of the inherent bias in Hindu society against Dalits. They worship his statues and find power in the protection extended to them by that sacred document whose finalisation Ambedkar oversaw – the Constitution.

His statues are not confined only to the Parliament and key public places across the country where they have been installed by successive governments. In remote corners in towns and villages, Dalits have pooled personal resources to erect Ambedkar’s statues out of their own initiative.

Acting as a source of power and pride for Dalits, Ambedkar is an irritant for the upper-castes unable to empathise with the exploitation Dalits have endured for centuries. If local administration would want to actually find out who are the people destroying his statues, it will not be a difficult task.

It is hypocritical on the BJP’s part to honour him in public while looking the other way at this attack on his legacy away from the limelight.