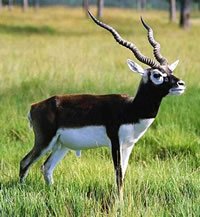 Patna: A blackbuck is reported to have been killed by poachers in the forested tracts of Buxar.

In a month’s time, this is by far the second incident of blackbuck killing reported from the district, said a forest official here on Saturday.

The divisional forest officer, Buxar said that the body of the blackbuck was recovered by the forest guards from Rasen village on Friday. He said that it appeared to be the handiwork of poachers as the animal’s skin and horns were missing.

The forest official said that following the recovery of the blackbuck’s body, the investigation revealed the possible involvement of eight odd people in the killing of the innocent animal.

He said that one the suspects has been arrested and the police is on the look out for the other culprits.

It may be mentioned here that the blackbuck is a graceful antelope and is a Schedule 1 animal in the list of endangered species under the wildlife Act.

This wild denizen is not found in thick forested areas and prefers open grassland and scrubs forests.