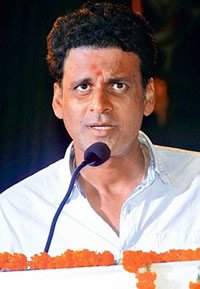 Acclaimed Bollywood actor Manoj Bajpai had a whale of a time during his 10-day break in Bihar, his home state, recently.

Apart from letting his hair down in the company of childhood friends, the Champaran-born artiste got an opportunity to champion the cause of Bhojpuri, his mother tongue, rather vigorously in Bihar.

At a Bhojpuri cultural programme called Purabia Taan organised at Premchand Rangshala in Patna, Bajpai expressed his resolve to fight for the cause of Bhojpuri.

He said that he had been trying for long to get films on Bhikari Thakur and Mahendra Misir, the two icons of Bhojpuri art and culture, but was unable to find any financier in Bollywood.

“The film financiers in Mumbai are not aware of the contributions of these two legends of Bhojpuri soil,” he said in chaste Bhojuri.

“But I have decided not to give up efforts to make films on them.”

Bajpai’s remarks elicited applause from the predominantly Bhojpuri-speaking audience. Interestingly, Bajpai has not acted in any Bhojpuri movie ever since he made his mark in Ram Gopal Varma’s Satya 16 years ago.

The actor says that he is still waiting for the right script.

Since the contemporary Bhojpuri cinema industry is known for churning out masala flicks , it is unlikely that any intrepid financier will come forward to fulfil Bajpai’s dreams of making a classic on either Bhikari Thakur or Mahendra Misir.