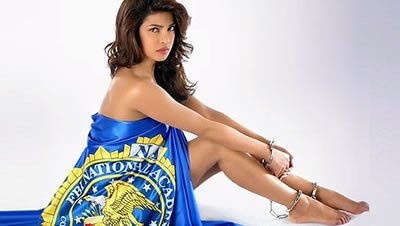 It is only natural to be excited about your new show or movie Priyanka but a little precaution before sharing content off the internet always helps.

From what appears to be a major faux pas, Priyanka Chopra seems to have shared a video from a Twitter handle which has her posing for the camera, wrapped in nothing but a flag bearing the emblem of the FBI (a la Mallika Sherawat in Dirty Politics), a promotional image for her latest American TV series Quantico. However, she also wrote with the video:  “Didn’t know it was online already!! New #Quantico teaser.. Is this the right link? @QuanticoTV lol.”

Well Priyanka, we don’t think it is. Neither Quantico nor ABC network have shared the image or the video of the teaser. The video that PC has shared is from a private channel and the caption reads “Sexy Priyanka Chopra Handcuffed and Shackled”. All the latest videos of the channel have only ‘sexy’ videos of some star or other.

Shouldn’t you have confirmed with the channel or your show’s producers before you published something like this, PC.

Bollywood star Priyanka Chopra has made history by being cast as the first Indian actress to land the lead female role in an American television show.

At a party sponsored by People and Entertainment Weekly magazines she talks about the news.

On the show, Chopra plays an FBI trainee named Alex Parrish, who is half-Caucasian-half Indian at Quantico Base in Virginia.

Chopra said she knows her fans in India are excited about the news as well because they’ve trended #Quantico worldwide like five times.