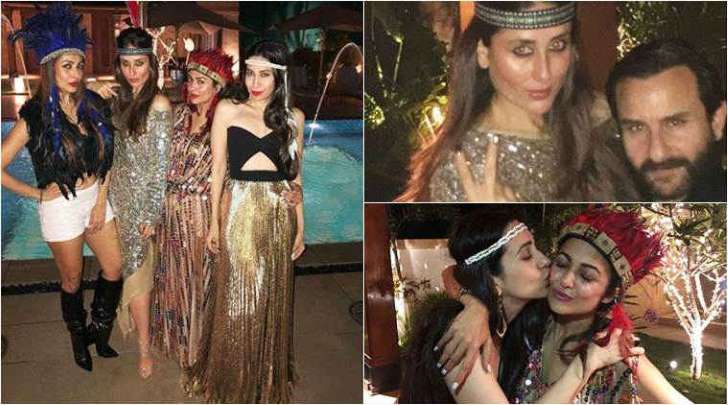 Bollywood’s all-girl squad of Kareena Kapoor Khan, Karisma Kapoor, Malaika Arora and Amrita Arora Ladak never fail to impress whenever they step out together. The four divas of tinsel town are glamorous, fun loving and they know how to make the onlookers feel jealous when they put on their party shoes. On Tuesday, the four besties took a private jet and flew to Goa to ring in Amrita Arora’s 40th birthday. Accompanying them was Kalakaandi actor Saif Ali Khan. And as we get our hands on the party pictures, we are sure Kareena left no stone unturned to make her best friend Amrita’s 40th a memorable one.

A social media pro, Karisma Kapoor and other attendees of the party including Seema Khan, Maheep Kapoor, Malaika Arora, Ritesh Sidhwani and wife Dolly Sidhwani and Natasha Poonawalla shared party pictures on their social media handles. Karisma, sharing a photo with the birthday girl, Amrita wrote, “Welcome to the coolest club 🤘🏻😘#happy40th#mygirl❤ @amuaroraofficial.” Dressed in their shimmery clothes and feathery headbands, the ladies played dress up for Amrita’s birthday bash and made it an eventful day for her.

Earlier in the day, Karisma and Malaika posted photos of them travelling in a private jet but the pictures didn’t have Amrita. Maybe the star of the day joined her gang later in Goa or if some reports are to be believed it was a surprise planned for her by Kareena and Malaika. Sharing the photo, Malaika expressed her excitement for sister Amrita’s birthday and wrote, “Lets get this party started……. ammuuuuuu.”

Amrita, Malaika, Kareena and Karisma have often set some serious friendship goals. Be it Christmas, birthday, casual brunch or even a shopping outing, the girls know how to do everything in style.