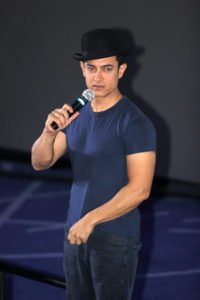 The final episode of the “Satyamev Jayate” Season 2 ended with a powerful note on voting issue of the country.

With the country’s 2014 Lok Sabha election looming at the doorstep, Aamir Khan donned his social crusader role to highlight the immediate political situation of the world’s second largest democracy.

To the shock of many, statistics revealed that at least 30 percent of Lok Sabha MPs and 31 percent of Rajya Sabha MPs have criminal cases pending against them including heinous crimes like murder, kidnapping, rape, dacoity, attempt to murder among others.

A moving case of an innocent girl being molested and murdered ruthlessly by a certain Raja Bhaiya, a local goon and heavy weight politician came out. However, the victim’s parents defied all odds stood up and fought against Bhaiya, leading to the latter’s conviction finally.

In the face of corrupt and criminal background politicians, Khan brought up the name of Ajit Sarkar, who was considered as an icon by locals of Purnea, Bihar for his clean, just and sincere image. Unfortunately, the people’s politician and three-time MLA Sarkar met a brutal end as he was grisly murdered by opponent Pappu Yadav, who still remains free.

Several guests in the show informed cases of rigged voting and criminal politicians:

a) Political parties choose candidates with graver criminal background because of their strong manipulative capability.

b) Voters are lured with not just cash, but goods, liquor and food. Former Chief Election Commissioner SY Qureshi informed astronomical amounts of black money in the garb of fake weddings, parties and sums hidden in ambulance, funeral vans and car-doors which have been unearthed by the EC.

c) The politicians with serious crime records relish their status and consider it their ‘market value’ which would help them in elections.

d) Selling away votes by only lower income group is wrong notion as a poll by the show presented middle class people ready to sell their precious votes in exchange of goods such as electrical products.

e) Selling away vote only leads to further anarchy as greedy and selfish members are elected resulting in frauds, scams and corruption.

Khan finally urged citizens to consider the broader perspective while voting, since the system of discrepancies grows only when we give away our votes to the incompetent and wrong. He concludes requesting all to vote unbiased for the able and deserving candidates.